1 To the angel of the church in Sardis write: These are the words of him who holds the seven spirits of God and the seven stars. I know your deeds; you have a reputation of being alive, but you are dead. 2 Wake up! Strengthen what remains and is about to die, for I have found your deeds unfinished in the sight of my God. ~ Revelation 3:1-2

We return to our study of the book of the Revelation, particularly Revelation 2-3. In the beginning of this book are the visions that the Apostle John received. The first vision sets the stage for the remainder of the book. It is a vision of the Lord Jesus Christ in His church.

In what we know today as the country of Turkey, there were seven churches that had been established in seven cities. Basically, when Paul founded the church in Ephesus, that church became a strong church and took the gospel, according to Acts 19:10, throughout all the rest of Asia Minor – which is Modern Day Turkey. Seven of them are mentioned here. Some thirty years had passed since the founding of those churches. And those churches had settled into their own identities. The key is to discover who was defining them. 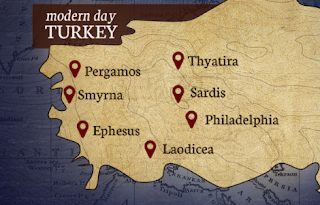 The Lord Jesus recognizes the makeup of each church, the issues in each church, and sends a message to each one; and they’re contained in Revelation 2-3. These are unique churches, and yet they’re the kinds of churches that exist in all periods of time, including now. So, in a sense, these letter are timeless, and they have literally spoken to every generation since.

Sardis was once one of the greatest cities of the world. It was rich in gold and silver. It is said that Sardis may have been the first place where gold and silver were minted into coins. There was a river there that was rich in gold from which the gold was mined. Because of its wealth, and its geographic location, Sardis was most often victorious because it was built on a mountain about 1500 feet above the valley floor.

Sardis was regarded as virtually impenetrable to military assault. But, Sardis was complacent, and was twice invaded by the Persians and by the Greeks. And, both victories were achieved by stealth. Sardis was so confident it could not be overcome that it failed to guard its walls adequately. Much like the city, the church was invaded by false teaching which lead to  hardened hearts. In this address to the church at Sardis, the Lord Jesus finds nothing good to say about them.

In v.1 we read, "To the angel of the church in Sardis write: These are the words of him who holds the seven spirits of God and the seven stars. I know your deeds; you have a reputation of being alive, but you are dead."

As in all these letters, the life of the church is revealed in its deeds. The Lord Jesus said to them, "I know your deeds; you have a reputation of being alive, but you are dead."

The church at Sardis was a "nominal church" or a church known as Christian in name only. There were no trials going on there. This is revealing due to the fact that trials are one part in the process of the believer growing in his faith in the Lord Jesus.

A light year is the distance light travels in a year, moving at 186,000 miles a second; that’s a light year. There was one particular star that astronomers estimated was 33 years away from earth. It would take 33 years for light from that star to reach earth. That star could have been plunged into darkness 25 years ago. It could have died. But light would still be pouring down to earth from it. It would be shining in the sky as brightly as if the star was still alive. The church at Sardis was much like that star. It was dead, but it was still shining by the light of a brilliant past.

In v.2 we read, "Wake up! Strengthen what remains and is about to die, for I have found your deeds unfinished in the sight of my God."

The first need of a church that is dying is to be awakened to its condition. The words, "Wake up", in the Greek is a staccato command, much like a slap in the face, designed to startle one to action.

Then, the Lord Jesus said, "Strengthen what remains." Their works were incomplete, unfinished. Their actions were right, but their motives were wrong. They were not doing good works for the right reason. As we read this we can see that here is a church that is busy doing good things, but doing them to impress the wrong audience. They were trying to display and enhance their image, but they lacked the approval of the most important audience, and that is the Lord.

Throughout the Scriptures we are told that God judges, not the things we do, but the reason we do them. He reads our hearts. He judges whether our work is done out of love and gratitude in response to what He has done for us.

Finally, a church like Sardis can recover from this condition because the Lord gives the prescription for the rekindled life. The church at Sardis needed the fresh oil of the Holy Spirit. They needed an oil change. Tomorrow, we will consider the steps involved in turning this type of complacent condition around.

BYoung Ministry
When I was five years old my mother died. Then, when I was seventeen years old my dad died. Three days before my dad died, I invited the Lord Jesus into my life. A year and a half later the Lord directed me to Columbia Bible College. He used my pastor at that time, Dr. Frank Wilkerson, and a couple who told me that God had led them to pay for my college education. It was miraculous! After two years at CBC, the Lord graciously brought Debbie King into my life and we were wed in August of 1988. We live in Elgin SC and we have three sons, two daughters in law and two granddaughters.